Grupo DISCO was set up in 1989/1991 as a result of the creation by Accesorios Frigoríficos, S.A. (Afrisa) of several companies that intented to form an Iberian group for the distribution of technical products for the commercial and industrial refrigeration and air conditioning markets.

Today, the Group as become a business group specialized in professional distribution of equipments, components, tools and accesories for the commercial and industrial refrigeration and HVAC sectors. With more than 45 years of activity, Grupo DISCO is a reference in the market thanks to its extensive experience and wide range of worldwide leading brand products.

Currently, it has 25 points of sale located in the main cities of Spain, Portugal, Latin America and Africa form which it offers a customized service to professional installers and maintenance managers of commercial and industrial refrigeration and HVAC. 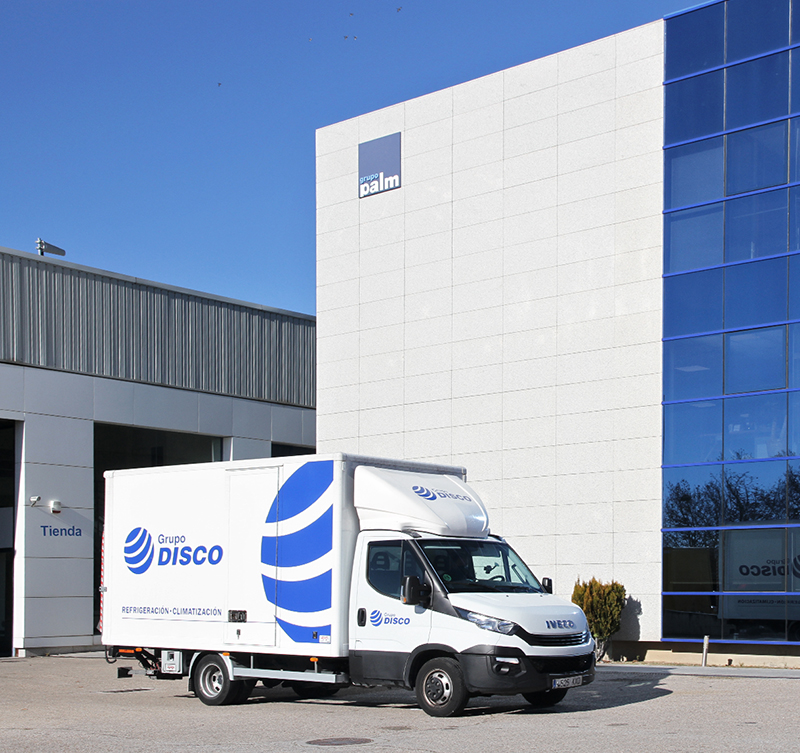 Accesorios Frigoríficos, S.A. (Afrisa) was founded in 1962 as a trading company for refrigeration products and components. In 1974 it signed several agreements for the exclusive distribution of Copeland´s products in Spain, the world leader in manufacturing compressors for refrigeration and air conditioning. These agreements were later on extended to Portugal.

In 1988, due to the renegotiation of the distribution agreements with Copeland, Afrisa became the distributor of the most prestigious products in those markets.

In 2003, in order to improve the logistics management and optimize the quality of service to its delegations and its clients, Afrisa moved to new and modern facilities in Torrejón de Ardoz (Headquarters), with a total surface of 8.600 m2, of which 6.000 m2 are warehouses and 2.600 m2 are offices, including a DISCO store, showrooms and conference rooms for staff training and product promotions for clients.

Latorre S.L., was set up in Valencia in 1963 feeling the need to cover the industrial refrigeration emerging market. It began to expand the family business, opening branches in Murcia, Gijón, Zaragoza and San Sebastián. After several decades being a family business company, and as a result of an important commercial strategy, in 1989, it became part of Grupo DISCO.

Comercial P. Valls, S.A, (Pevasa) was founded in 1983 and became part of Grupo DISCO in 1990. Pevasa was born to meet demand in the Cataluña and Andorra markets. In November 2008, Afrisa took over Pevasa and so its branches joined in the commercial force of Accesorios Frigoríficos.

Distribuidora Comercial del Frío de Málaga, S.A (DISCO Málaga) was created in the summer of 1990, and focused its activity on the wholesale distribution of equipments and accessories for industrial and commercial refrigeration and air conditioning in Málaga, Granada, Jaén, Almería, Campo de Gibraltar, Ceuta and Melilla. After more than 17 years working as an independent company within Grupo DISCO, DISCO Málaga and Afrisa merged at the end of 2008.

Distribuidora Comercial do Frio Lisboa, S.L (DISCOLIS), was founded in 1991 with the participation of Portugal´s largest manufacturer and installer parteners. Afterwards, in 1994, Grupo DISCO ended up owning practically the100% of the company. Nowadays, DISCOLIS has four branches in Lisbon, Braga, Aveiro and Oporto from where it covers the Portuguese market.

DISCO Madrid, was born as a distributor for the central region, Castilla y León and Galicia, and western Andalusia later on. In 1997, Afrisa took over the activity and human resources of DISCO Madrid.

We are a company specialized in the professional distribution of equipment, tools and accesories for comercial, industrial, and air conditioning refrigeration.